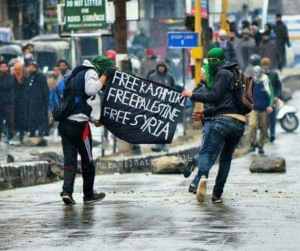 The struggle for democracy in Syria against the Assad dictatorship is yoked inextricably to the struggle of Palestinians against Israeli colonialism & ethnic cleansing. Most Palestinians understand that well & many have spoken out against vilifying Syrian revolutionists as “jihadist terrorists” because that is exactly how they are portrayed to discredit their struggle against occupation.

They also recognize the parallels between what Assad forces are doing in east Aleppo & what they did in the Yarmouk & Khan Eshieh Palestinian refugee camps in Syria. They know that nearly 450 Palestinians have been murdered in Assad’s gulag & that 1,100 remain jailed, not for criminal misconduct but as political prisoners.

It’s a rare Palestinian or Kashmiri (who are also vilified as terrorists) who doesn’t grasp the character of Assadist propaganda about terrorists. And now alleged “jihadist” connections with ISIS & al-Qaeda are being used by the military junta in Myanmar to justify genocide of Rohingya Muslims.

It has been unseemly to watch Palestinian supporters like Max Blumenthal & Rania Khalek crash & burn by becoming glib apologists for the Assad regime & spouting rubbish about “jihadists” in east Aleppo. Much more distressing is seeing a number of Palestinian solidarity supporters who have sided wholeheartedly with Assadists, who don’t appear to have investigated the actual role of Israel in supporting Assad, & whose comments about the issue are indistinguishable in many ways from David Duke, the KKK supporter of Assad.

It is not politically apparent why this fault line in emerging in the antiwar, Palestinian solidarity, & socialist movements but it has been developing for a while. This is not the first time in history that such dramatic ruptures have divided movements.

What is required in response is not rancor & vituperations that go nowhere. The struggles in Syria, Palestine, Kashmir don’t have time to wait a few decades until progressive forces work out their differences. That won’t be until hell freezes over. What is required is that committed activists try to understand what is happening to the movements, why it is happening, what are the politics of these degenerations. We work with others where we can & go our separate ways when we can’t.

The most important thing is to keep our political bearings by focusing on how to best unify with others & build international solidarity movements. Of course, there can be no rapprochement in action between antiwar activists demanding all foreign military forces immediately, unconditionally withdraw from Syria & those with placards supporting Syrian bombing of civilians & Russian or US intervention.

Like the ancient symbol of the Phoenix, out of the ashes of the old a new movement will be regenerated that will broker no discounts on justice for the oppressed, that will not accept hateful propaganda against Arabs & Muslims as truth, that will stand four-square & not be moved–just as Kashmiris, Palestinians, & the popular resistance in Syria.

We stand with the people of east Aleppo & all of Syria as we stand with Palestinians & Kashmiris.

These are activists in Srinagar, Kashmir expressing on their placard the iron law of solidarity which the oppressed understand so well. Hopefully others will learn from their struggle how to stand as steadfast.