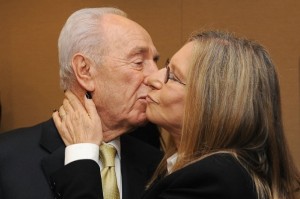 Barbra Streisand was on TV tonight promoting her new album of duets. She has such a lovely voice–but it’s hard to listen to her without thinking of her ardent support for the Israeli military in its murderous assault on Gaza last summer.

Every year she heads up a glitzy fundraiser in Beverly Hills for the IDF. The one last November–just three months after the IDF bombed Gaza to smithereens–raised $33.5 million from over 1,200 celebrity guests including Chris Tucker, Pamela Anderson, Schwarzenegger, Stallone, & even Ricky Martin. So much for that “la vida loca,” Ricky, when you support carpet bombing & apartheid.
A couple years ago she carted all her relatives to Israel to perform for the 90th birthday of then president Shimon Peres–whose obituary I look forward to writing. She called Israel “a shining beacon of hope in the world.”

It’s a pity. All that talent. All that amorality when it comes to Israel.
This regrettable moment of Peres & Streisand was at his birthday party. It looks like she’s giving his corpse mouth-to-mouth resuscitation.