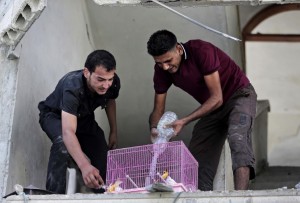 Sometimes the simplest things are the most telling. The psycho-state of Israel has ceased fire for a 12-hour period & Israelis watching ethnic cleansing from the hills of Sderot can take a bathroom break now or check to see if dinner’s ready or catch up on the sports page.

Palestinians are returning to mountains of cement rubble to retrieve what they can from demolished homes.These young men in Beit Hanoun (the town where Israel bombed the hospital & refugee center yesterday) are trying to save the family birds who they found still alive. Not exactly the image of terrorists are they? But then who knew this stage of Operation Ethnic Cleansing would bring the truth all home for all the world to see?

Those who have eyes & see not & who have ears & hear not can stuff their cognitive dissonance. Playing stupid doesn’t cut it any more.

Support the economic boycott of Israel (barcode beginning 729); support the cultural boycott, & join the hundreds of thousands around the world demanding “Stop the massacre in Gaza!”