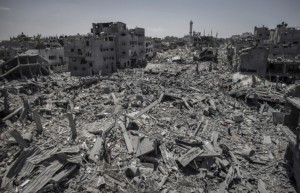 You wouldn’t think even the inventive minds of hasbara agents could hedge on this one, would you? This is the landscape of the Shuja’iyya residential neighborhood in Gaza City that Israel blasted into smithereens this week ostensibly to take out tunnels & rocket launchers. Of course nobody with half a brain & an ounce of decency buys that. There are dozens & dozens of these kind of scenes all over Gaza but captions still hedge with comments like, the area “was reportedly heavily damaged by shelling & airstrikes.” You think!?

The UN is cooking up another investigation for after the carnage ends to cover Israel’s ass for war crimes while Amnesty International claims the jury is still out on war crimes. God knows where Human Right Watch stands on this. They’re probably vacationing in the Bahamas so they don’t have to bear witness. They all belong to the “see no evil, hear no evil” crowd. Perhaps if they go up to the hills of Sderot they can take a front row seat along with all the other psychos & try to gather data from there.

Support the Palestinians: grab a placard & join a rally, boycott their products, & support the cultural boycott of Israel