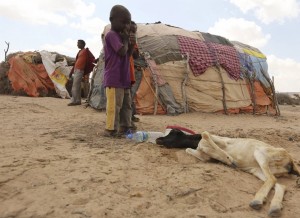 The Guardian-UK caption to this photo read, “Hargeysa, Somalia: Children look at their sheep suffering during the El Nino-related drought.” Meanwhile, media for the most part remains dead silent about the one million people, including 58,000 children, in Somalia facing death by starvation.

They can blame it on El Nino, they can blither on about crop failure (without mentioning US drone bombing that makes sustainable agriculture impossible) but there were recent droughts caused by El Nino in California & Texas & the supermarkets & livestock feed stores were stacked to the ceilings.

Mass starvation is not a weather problem–though it is becoming so due to climate change caused by neoliberal economic policies like deforestation. Mass starvation is a political problem caused by racism & colonialism. If the US can afford to send bombers to Somalia, it sure as hell can afford to airlift massive food & water relief–& it would if it gave a rat’s ass about human beings more than it cared about profits from plunder.

The ubiquitous image of Africa is emaciated suffering children. It’s fundamentally a white supremacist image to evoke pity & justify military intervention. It’s actually an image that goes back decades to mask colonialism & make Africans appear incapable of managing survival & their own affairs. It included campaigns among children in the 1940s to give their pennies to ‘save the pagan babies of Africa.’ Now the Pentagon is gearing up, with deployment of troops under Obama, & CIA operations in several countries, to ‘save the pagan babies’ with bombs & re-colonize the continent.

Learning about African countries to prevent military interventions includes understanding what these “famines” which afflict Africa are really all about.