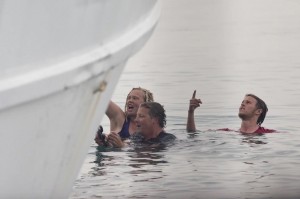 For the past week, there have been conflicting reports about the deportation of Afghan & Pakistani refugees from Greece to Turkey. On Monday, over 200 were sent from the refugee concentration camp at Moria on the island of Lesbos back to Turkey where they will live in squalor under a repressive regime. By Tuesday, it was being announced deportations were halted for procedural reasons but would be resumed today.

This is the scene today at Lesbos where human rights activists are attempting to disrupt the deportation of Pakistani refugees on a ferry set to sail for Turkey.

Our deepest regrets to the refugees that solidarity is still too weak to defend their rights or end those monstrous wars; our fullest respect to the activists who place their bodies in front of the boats, but they won’t be able to stop those boats for long before soldiers are moved in to arrest them. What they need is the big battalions of international solidarity at rallies outside embassies demanding: Immigration is a human right; open the borders.