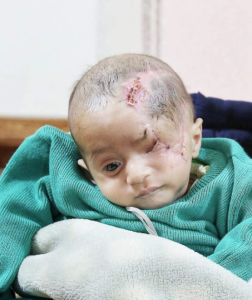 This is two-month-old Karim Abdallah whose mother was killed in a Syrian airstrike last month in Eastern Ghouta, a suburb of Damascus under ‘surrender or starve’ bombardment as a stronghold of revolutionary resistance to Assad’s dictatorship. Both Syrian & Russian war planes & helicopters are bombing the district though there is supposed to be a ceasefire.

In the Syrian airstrike that killed his mother, baby Karim lost his left eye & endured a skull fracture. His doctors say that because of the bombing siege & denial of humanitarian aid, the required medical treatment & supplies are not available in Eastern Ghouta to protect the infant’s right eye from the spread of infection . The infant needs to be safely evacuated for treatment outside Syria. The infant’s father Abu Mohammed said hundreds of other infants in Eastern Ghouta require evacuation for medical treatment which is a requirement under international law even in a war zone.

Fifteen-year-old Muhammad Najem from Eastern Ghouta posted this photo of baby Karim along with several other photos of infants & children injured & disfigured by Syrian & Russian airstrikes. He said “I am not going to apologize about the ugliness” of the photos. A teenager witnessing such carnage should not have to apologize since he is forced to witness & endure such death & destruction in defense of a murderous dictatorship. He is serving as a citizen journalist to tell the world the truth about the character of the Assad regime.

Stand with the Syrian people & demand the immediate, unconditional withdrawal of all foreign military operations in Syria & that Assad immediately stop the bombing. Those who support Syrian & Russian bombing of civilians have crossed over to the dark side in politics. May they find their way back before the counterrevolution in Syria has killed any more men, women, & children.