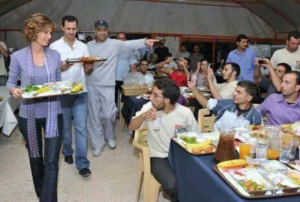 There’s a dead tip-off to propaganda: kissing ass, bending the knee to power, sycophancy. This photo has been posted by dozens of Assad supporters, one more groveling than the next, including Eva Bartlett. The caption reads, “Humble Syrian leader Assad: Mr. President Bashar Al-Assad & the first lady provide food for the children of martyrs.” This is almost as revolting as the photos of Tim Anderson, Eva Bartlett & Vanessa Beeley with the ‘exalted Syrian Arab Army’. Humble is not a political virtue either for the oppressed or a dictator. For the latter, it is nothing but propaganda. Otherwise, how does he explain the bombing of civilians with barrel bombs & gas?