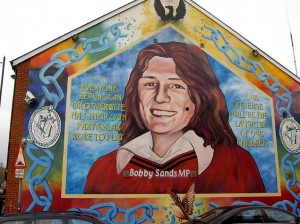 Solidarity is one of the most powerful forces in the world. It is not an act of noblesse oblige but the iron law of social transformation. It can change the world.

We honor all political prisoners, including Mumia Abu Jamal in the US, for their contribution to the struggle for democracy & human rights.

(Photo is a memorial mural of Bobby Sands in Belfast.)