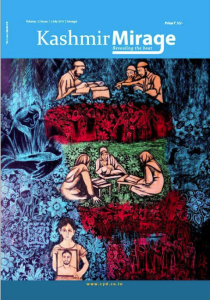 My article on stone pelters in Kashmir Mirage titled “Soil of Sorrows”:

The Stone Pelter in Kashmiri Resistance

The iconic image of Kashmiri popular resistance to Indian military occupation is the stone pelter usually depicted in media imagery as an isolated, antisocial element, an unruly maverick. That is exactly how Palestinian stone pelters are portrayed by media. It is rare that media shows the mass mobilizations behind the stone pelters, the thousands of unarmed protesters who remain just beyond the scope of the camera–or more aptly, the political vision of media.

The stone pelter is not a rugged individualist nor a loner but emerges from the mass struggle of thousands, functioning as something of a citizen’s defense guard. Of course, some of them are unruly and engage in provocations; they are young, Of course, some of them are agents provocateurs. But the majority of them are committed, fearless activists responding to aggression against unarmed protesters by a military armed to the teeth with tear gas, stun grenades, pellet guns, live ammo.

From the late 1980s until about 2008, armed guerrilla militancy dominated Kashmiri resistance, substituting for a quiescent popular resistance to Indian control. That armed insurgency is what led to the massive military build-up of 700,000 Indian troops and counter-insurgency forces in Kashmir. But there was a tectonic shift between 2008 to 2010, the beginning of a new phase in the struggle where Kashmiris rose up en masse to actively and peacefully oppose the occupation. In that dynamic, guerrilla politics which had proven ineffectual against a sophisticated, high-tech army, lost their luster and appeal to youth.

There appears to be a small industry of psychological profiling and sociological analyses of the stone pelter. Psychologically, they are portrayed as disaffected youth, alienated, angry, venting pent up frustration, attempting to overcome a sense of helplessness by stone pelting as though it were anger-management therapy. The socio-economic demographics describe unemployed youth with time on their hands and nothing better to do than find soldiers and lob rocks at them.

All of that may be true, is likely true, since Kashmiri youth have every reason to be be angry at the occupation. This generation of youth has come of age in the most militarized region on earth, with one Indian soldier to every 17 Kashmiris. They sustain military checkpoints, constant surveillance, curfews, internet and social media blackouts, search and cordon operations, relentless violations of their human rights and freedoms. Kashmiris have sustained tens of thousands of deaths at the hands of troops, injuries, disfigurement, and permanent disabilities from pellet guns, tear gas, stun grenades, live ammo. They have sustained mass rapes and constant sexual harassment of women and girls, torture, forcible disappearances, incarceration and administrative detention, mass graves. And on top of all that, high rates of unemployment.

Since the emergence of stone pelters as the defense guards of a massive, national social movement, Indian propagandists attempted to portray them as influenced by or linked to foreign terrorist cells in Pakistan and Afghanistan–as externally controlled rather than politically compelled by resistance to a brutal occupation. There is in fact political influence in Kashmir from Pakistan because for its own reasons it supports Kashmiri resistance. Self-determination means Kashmiris will themselves resolve the issue of alliances and allegiances. Some may want to be part of Pakistan. It is likely the majority want to be free of both Pakistan and India. Today the number of armed militants in Kashmir associated with Pakistan is under one-thousand and some sources say only a few hundred. Except in shared commitment to azadi, there is no comparison between armed militancy and stone pelters associated with the broader movement who attempt to thwart military operations and defend unarmed protesters.

Along with portraying stone pelters as agents provocateurs for Pakistan, Indian propagandists have vilified them as part of a “pan-Islamic Intifada movement,” as “Islamic jihadis” influenced by Wahhabi indoctrination and engaged in “terrorism by stones” with the goal of establishing sharia law and a caliphate in Kashmir along the lines of ISIS in Syria and Iraq. This approach is Islamophobia, the war and hater-mongering ideology of this era, applied to Kashmir and has almost nothing to do with political reality. Such a line went over so well to vilify the Syrian revolution and support the counter-revolution that it’s now being employed against political resistance in Kashmir to justify the occupation as well as against Rohingya Muslims to justify ethnic cleansing in Myanmar.

Since the 2016-2017 uprising in Kashmir, Indian propagandists have been claiming that stone pelters are paid agents, presumably from Pakistani funding sources. This is where propaganda has become indistinguishable from farce. It’s claimed on the basis of a sting operation with a small group of five Kashmiri youth, that stone pelting is a lucrative business operation, that they are paid by unknown “underground masters” to attack Indian forces with stones and Molotov cocktails. Some propaganda sources claim the money is funneled through independence leader Syed Ali Geelani. According to India Today TV which ran the sting, the rent-a-rebels are paid Rs 5,000-Rs 7,000 (£80 / US$103) a month. The sarcasm of course is that resistance to the occupation is rooted in Kashmir, not in Pakistan and there is no need to pay Kashmiri youth to defend themselves against a well-armed military. On the other hand, there’s no need to refuse any fool willing to pay them either. India Today TV should consider itself played.

One can view stone pelters in a pacifist, moralistic way and condemn them for using violence. But that would be to confuse violence with self-defense. It has long been a mantra of the oppressed that they have the right to fight injustice and persecution “by any means necessary.” If there is anything necessary it is defending unarmed protesters, it is thwarting phalanxes of soldiers with pellet guns, tear gas, grenades, and live ammo.

Indian military authorities are increasingly concerned that thousands of Kashmiris, including women and the elderly, are intervening even in nighttime search and cordon operations where homes are vandalized and ransacked, women, children, and elderly assaulted, militants executed, and homes demolished. Stone pelters are part of those protests fearlessly obstructing the military operations to defend the cornered militants and those being assaulted.

This is presenting problems to the Indian army who began with escalating rhetoric against stone pelters and is now escalating violence in these search and cordon, more aptly called hunt to kill, operations. Army officials claim that the disruptions have enabled 25 militants to flee the encounter site and avoid arrest in the past year. In February 2017, a high-level military review board established new protocols to deal with unarmed protesters and stone pelters who disrupt these hunt to kill operations. Apparently those protocols include increased violence against the protesters since several have been killed or seriously injured since then.

Now Indian media reports the military are providing special training to the Central Reserve Police Force (CRPF) to handle stone pelters and “unlawful gatherings,” meaning residents who pour out of their homes to obstruct the hunt to kill operations. The training procedures include the use of water cannons, tear gas, lathi attacks, use of rubber bullets, pump action guns, live ammo. What the special training is really about is using more lethal violence against protesters.

There will certainly be a crackdown and large-scale arrests of protesting youth, whether they are stone pelters or not. What characterizes the occupation is the indiscriminate use of violence against militants, protesters, stone pelters, children, elderly, bystanders.

It is a fortuitous blessing that as Kashmiris rose up en masse between 2008 and 2010 to resist occupation, social media was coming into its own. Kashmiri activists pioneered the use of social media to educate others about their struggle and break the news blackout that had prevailed for decades. That gave Kashmiri Intifada a whole new dimension and the possibility to build international solidarity with their struggle. Were it not for the persistence of activists on social media, the Indian army would be committing human rights crimes without coverage in international media or widespread international condemnation. It is not an overstatement to say that the editorials and articles in major international media would probably not have been written were there no need to keep pace with revelations on social media.

Historically, armed militancy thrives in periods of political demoralization and isolation, when mass insurgency has abated, and impatient, committed activists attempt to substitute themselves for the popular movement. That was true of Palestinian Intifada also. It may be part of India’s strategy to increase violence, to incite large numbers of youth to again take up armed struggle as a pretext to crush the growing mass social movement. It doesn’t appear to be working and it won’t so long as there is increasing active international solidarity with Kashmiri self-determination.

Kashmiris have stood alone long enough. Their struggle is monumental and historic. A victory against occupation and colonialism would resound around the world and alter the balance of forces internationally to the advantage of the oppressed. Their struggle is our struggle.