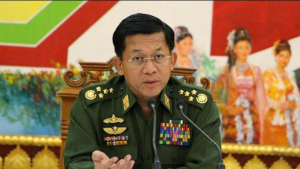 This is Senior General Min Aung Hlaing, Commander-in-Chief of the Burmese military since 2011 & the man organizing genocide against the Rohingya people in Arakan state as well as war crimes against other ethnic groups in Kachin & Shan states.

The European Union has maintained an arms embargo on Burma since 1996 which comes up for renewal on April 30th. Under the sanctions, it is illegal for EU countries to sell or export weapons, with the exception of non-lethal military equipment. Since India classifies pellet guns as non-lethal for use in Kashmir, that designation probably covers a multitude of lethal loopholes.

On April 23rd, just days before the renewal date this year, before it was certain what decision the EU would make about renewing sanctions, Germany & Austria hosted a delegation of top Burmese military officials led by Hlaing. They toured arms & aircraft factories & met with senior military officials in both countries. A week later, the EU renewed the arms embargo until April 30th, 2018.

Last November, whilst the EU sanctions were in place & during a major military assault in Arakan state that sent nearly 90,000 Rohingya fleeing for their lives, Hlaing was being given red-carpet treatment by Belgium & Italy where he also visited arms factories. Britain has been providing free military training to the Burmese army since 2013, sarcastically calling it “training in human rights & the law of armed conflict.” You can’t make this Kafkaesque crap up. Last year that training cost the UK £305,000 ($405,000 USD). A few days ago, 157 British MPs urged the government to suspend the training.

That would explain the dead silence by those European countries & for that matter the EU in response to the genocidal crackdown going on. Is what the Rohingya are sustaining the result of British “training in human rights & the law of armed conflict”? Or is the UK teaching them the methods it used when it was a colonial power & in its wars in the Middle East?

No military aid to Burma. Stop the genocide of the Rohingya people. Stand with them in their struggle for full human, democratic, civil, & refugee rights.

(Photo of Hlaing from Reuters)