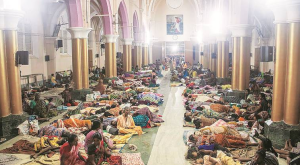 On September 19th, a Kashmiri college student at AMU in Aligarh, Uttar Pradesh, India was arrested on charges of promoting hatred & anti-nationalism & was expelled from school for commenting on FB about the Sept. 18th attack on the Indian army base in Uri, Kashmir.

Yesterday, Mudasir Rashid, a Kashmiri student in Udaipur, India was arrested for ‘anti-nationalist’ posts on FB about the Uri attack & was also suspended by the college. He was reported to authorities by activists in ABVP (a rightwing nationalist student group) who protested & vandalized college property to demand he be expelled from college & from India.

On August 2nd, a group of rightwing nationalist youth went to the police about Tauseef Ahmad Bhat from Sopore, Kashmir who worked for a mobile company in Chhattisgarh. They complained about “anti-India content” on his FB wall. He was arrested on sedition charges, is still in jail & his several bail appeals have been denied.

Tauseef Ahmad Bhat is booked under section 124A of the Indian Penal Code which is a malignant piece of legislation banning criticism against the government in any form, including articles, cartoons, speeches. It reads:

In 2010, Arundhati Roy, Kashmiri activist Syed Ali Shah Geelani, & five others were charged under 124A for speeches they made at a conference about Kashmiri self-determination. In 2012, Aseem Trivedi, a political cartoonist was arrested under 124A in Mumbai for anti-corruption cartoons & for “insulting the Constitution” during a 2011 protest. In 2015, Kovan, a Tamil folk singer in the state of Tamil Nadu was charged with 124A for a song criticizing the state government’s liquor policy. Thousands of villagers in the state of Tamil Nadu have been threatened with 124A & hundreds have been charged for protesting since 2011 against a nuclear power plant.

In February of this year, the JNU student union president Kanhaiya Kumar was arrested in Delhi under 124A. He was charged with sedition for ‘anti-India slogans’ at a student rally protesting the 2013 hanging of a Kashmiri activist convicted for a 2001 attack on the Indian Parliament. Kumar was eventually released after widespread protests in India.

On August 17th of this year, Amnesty International India was charged with sedition & “promoting enmity” by police in Bengaluru after the ABVP nationalist student group filed a complaint for a function AI held to protest human rights violations in Kashmir.

Indian courts claim 124A prosecutions are for incitement to violence & public disorder so none of the high-profile cases accompanied by public protests resulted in trials, convictions, & jail time. It’s primarily used to harass, intimidate, & stifle dissent. But then there are the countless cases of activists like Tauseef Ahmad Bhat who has been in jail & denied bail since August. At least 58 people were arrested under 124A in 2014, the first year India published data on sedition charges. There is no report on what happened to them in the courts or if they continue to suffer forms of harassment.

Section 124A has never been used in Kashmir since they have the Public Safety Act which allows the Indian army to pick up activists & jail them indefinitely without charges or trial. It also appears that most of those in India charged with sedition are for opposing the nuclear power plant in Tamil Nadu or for speaking out against the occupation & human rights crimes in Kashmir in order to weaken attempts to build an anti-occupation movement in India.

It is of considerable interest that the Indian Penal Code was enacted in 1860 by British colonial authorities. Section 124A was added ten years later as a means to repress opposition to colonial rule. India did not discard the 124A colonial provision when it became independent in 1947 & in fact, the Supreme Court upheld it in the Kedarnath Singh v. State of Bihar case in 1962.

Photo is Tamil Nadu youth involved in anti-nuclear protests who were arrested for sedition under 124A. They claim their passports are blacklisted so they cannot travel abroad.