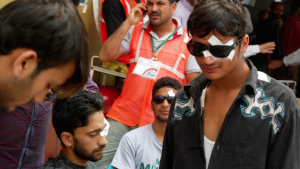 In what India must have thought was a foxy move, they announced on August 15th that the Indian military would seek alternatives to the deadly pellet munitions that were disfiguring, blinding, & disabling thousands of unarmed Kashmiri protesters. They proposed PAVA or chilli grenades as less deadly although they are extremely dangerous.

The Indian army made that announcement in response to legal action against pellet munitions filed in the Jammu & Kashmir High Court on July 25th & to make India look good in international media which was reporting the horrors pellets inflicted on unarmed protesters. But they never had any intention of withdrawing pellet guns from service in Kashmir. On August 20th, they filed an affidavit in the J & K High Court claiming pellets guns were necessary in “extreme situations” as an alternative to live ammunition. Less people end up dead that way & more end up blinded, disfigured, disabled, & in lifelong pain. Such is the deranged thinking of militarism.

The Jammu & Kashmir High Court ruled on pellet guns last Wednesday, September 21st. The J & K High Court operates just like the Israeli courts do in sanctioning human rights crimes against unarmed Palestinian protesters. It refused to ban pellet guns saying the use of such lethal force is “inevitable” when the army is confronted with violent protesters.

Along with that ruling, two of the judges denied the legal brief to prosecute soldiers involved in the use of pellet guns. Impunity for human rights & war crimes in Kashmir is guaranteed by the Armed Forces Special Powers Act (AFSPA) enacted in 1958 & modeled on a 1942 British colonial law to repress the Quit India Movement.

The High Court said the issue of pellet munitions cannot be adjudicated since no fact-finding authority has reported evidence of excessive force or violations of standard operating procedure (SOP) in Kashmir. That would be because investigative delegations from the UN Human Rights Council as well as Human Rights Watch & Amnesty International have been refused entry to Kashmir.

But let’s get real! For the past 82 days of the siege, mainstream & social media have been filled with hundreds of photos of Kashmiris, including children & elderly, who were pummeled with thousands of lead pellets. The Indian army admitted publicly in Indian media that it does not follow SOP in discharging pellet guns which is to shoot below the waist–as if injuries below the waist were civilized in some way. They claimed with the deranged hubris of power that unarmed protesters were hit above the waist when they knelt to pick up stones to throw.

This photo is protesters outside the main hospital in Srinagar (in August) who were injured by pellet guns fired by Indian soldiers.

End the occupation. Stop the use of pellet guns & all weapons against unarmed protesters. Self-determination for Kashmir.