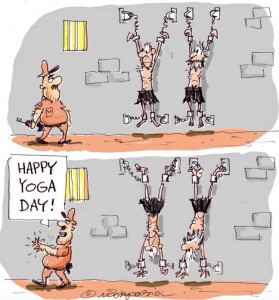 This is a slightly edited version of my post last year at the inauguration of the event:
****

Indian Prime Minister Narendra Modi led 37,000 people in a mass yoga session in Delhi’s Rajpath, an area where protests have been banned. The event is part of the first International Yoga Day called by Modi. Mass yoga sessions were held in several countries including the US & China. The day was built as one to promote “harmony & peace.”

The Chinese government violently suppressed the Falun Gong about 15 years ago for holding similar mass events with qigong, calling it heretical. There are no reports they cracked down on the mass yoga events–though yoga, rooted in Hinduism, is also heretical to Chinese communism.

Modi claims he’s a long-time practitioner of yoga–though you wouldn’t know it from his awkward execution of the different postures. Given Modi’s political history & his obvious public relations jaunts to put pogroms against Muslims behind him, we should question what this yoga business is all about. Is it part of the international attempt (which Obama is a part of) to create “Brand Modi”? Modi the man of peace not pogroms?

Maybe it is, as Muslims claim, an attempt to assert the dominance of Hinduism in India & promote a “Hindutva agenda at the cost of India’s secular democratic fabric.” Or is it Modi’s version of Obamacare in a country the World Health Organization ranks as one of the worst healthcare systems in the world (112 out of 190 countries)?

Is it a diversion from political reality like Michelle Obama’s obesity, organic garden, exercise thing? Or does it have associations with tyrannies, like fascism in Germany, where physical fitness became a sign of Aryan supremacy?

Or perhaps it is an attempt by India to reclaim yoga from US & European practitioners who have commercialized the practice, eliminated the spiritual aspects & use it solely as exercise?

Maybe we can get some clues from the 37,000 participants led in stretches, bends, & breathing asanas by Mr. Modi. According to media reports, they were “school children, bureaucrats, & soldiers.” Were they there on command? Will the Indian soldiers participating employ some of those peace-making asanas when they’re on duty in occupied Kashmir? Why did the event have to be locked down with thousands of police & paramilitary troops? Was there any likelihood of the yogis rioting?

Curious minds want to know because we’re awash in skepticism when Narendra Modi gets into the asana of a peacemaker.

(Cartoon is Modi’s style of yoga by Hemant Morparia)