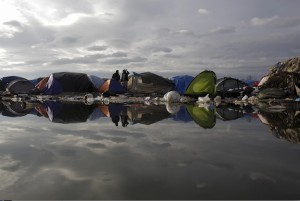 Right out the gate of this latest hysteria, refugees & immigrants are coming under attack as if they had something to do with terrorism. Xenophobia is an essential component of the racism that makes the world go round under neoliberalism, the barbaric phase of capitalism.

There’s very much a news gray-out about what’s happening with Syrian, Afghan, Pakistani, Palestinian refugees on Europe’s eastern borders–at a time when winter has made conditions for thousands of un-sheltered people unbearable.

How dare they pass off the malarkey that one of the terrorists in Paris posed as a refugee & made it all the way from Turkey to Paris just so he could blow up the place! This isn’t the first time they’ve pulled that crap. Just a few months ago, French police were on a manhunt in the refugee camp at Calais looking for a Syrian refugee who they claimed had done the same thing so he could blow up Britain. How they could possibly know that remains a mystery. He must be another one of those terrorists who leaves his passport as a calling card for police.

While there’s something of a news gap about refugees on the Turkey to Europe route, there are alarming reports about what’s gong on at Calais where the majority of refugees are Africans & others on the Libya to Europe route. First there were a series of unexplained fires at the camp last Friday that all began late at night. Now there are sporadic media reports that Calais will be targeted by police for harboring suspected terrorists.

Attacking primarily black African refugees & attempting to break up their camp rather than integrate them or let them move on to Britain is a deft even if utterly malignant use of racism to begin the onslaught against refugees & immigrants. Aid workers at Calais report huge numbers of unaccompanied children living in the camp. Is ISIS so clever as to be using small children now to blow up Europe? Will French police shoot them down or arrest them just like they’ve let them starve?

This photo is the camp at Calais.

Immigration is a human right! Open the damn borders! All out in defense of refugees & immigrants. The ass we save will be our own.