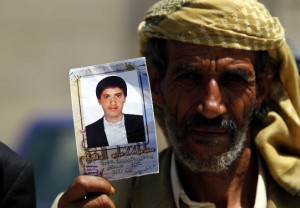 This man in Sana’a, Yemen was part of a protest demanding the release of Yemenis held in Saudi prisons. He is holding up a photo of his son, now a political prisoner in Saudi Arabia. There are no reliable estimates of the number being held.

What makes this story so significant is that on April 16th, just prior to Obama’s summit visit to Saudi Arabia, the US released nine Yemeni prisoners from Guantanamo prison to Saudi Arabian custody. Most of the media portrayed this as part of Obama’s attempts to close Guantanamo before he leaves office in January 2017.

It needs to be remembered at the outset that none of these men, who have been held for years, have been charged with a crime or provided due process. They are referred to disdainfully as “lower-level inmates,” with the exception of Tariq Ba Odah who the military has been force-feeding since he began a hunger strike in 2007. He is now skeletal at 74 pounds & his health in grave danger. His case has generated considerable legal disputes between his lawyers & the intractable US Department of Justice under Obama.

One US official said the prisoner transfer was the result of years of negotiations because Saudi Arabia was resistant to taking non-Saudi nationals. They even offered to pay for a facility in Yemen so they didn’t have to take them. The question is, if the men have not been charged with any crimes, why are they not being returned to their families in Yemen or allowed to go where they want?

The Obama regime says it opposes sending them to Yemen “because it is engulfed in civil war & has an active al Qaeda branch.” First of all, it isn’t a civil war; it’s carpet bombing by a Saudi-led, US & UK-backed coalition. What’s that got to do with where the nine prisoners go? Obama officials also claimed all nine men had family connections in Saudi Arabia. So what? They weren’t in Saudi Arabia when they got picked up so they may not want to go back there.

Obama officials also say they’re sending the prisoners to Saudi Arabia because it “operates a rehabilitation program for those who have drifted into militant Islamism” & helps them “reintegrate into peaceful society.” According to the Saudi prince who runs the rehab program, it has “a record of reducing, though not eliminating, the risk of recidivism.” Recidivism from what, since they haven’t been accused of a crime? Why are they being rehabbed?

So what the hell is going on here? Are they being sent to Saudi Arabia because they have family there? Because they need rehab? Or because Yemen is being carpet bombed?

A Pentagon official called the prisoner transfer a “humanitarian gesture” by the Saudi government. It turns out that vaunted rehab program is just a high-security prison for those the Saudi regime deems “jihadists.” The transfer is nothing but a switch & bait operation so that Obama can pretend he’s closing Guantanamo by simply transferring prisoners elsewhere. But why so insistent they go to Saudi Arabia? So they can be cell mates with other Yemeni political prisoners? Are those the family connections the Obama regime referred to?

The NY Times has described those Saudi rehab prisons almost like they were resorts with “three catered meals per day & sleep in luxury suites outfitted with big-screen TVs, king-size beds & shiny wallpaper” & even conjugal visits. Are we being asked to believe that the same regime that beheaded 47 political dissidents last January has a humane approach to political prisoners? Sometimes when you talk out of both sides of your ass you get caught in your own lies.

The historic imperative remains: rebuild the international antiwar movement to demand the end of bombing & occupation in Yemen & the release of all political prisoners.