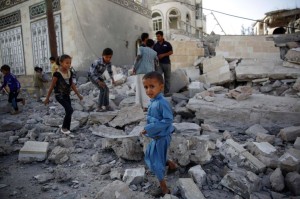 This is the rubble of a house destroyed in a “Saudi-led airstrike” in Sanaa, Yemen. The tragedy is it could be Syria, Gaza, Afghanistan, Pakistan, or Iraq. In Yemen, the operation is called Decisive Storm & includes fighter jets from Egypt, Morocco, Jordan, Sudan, the United Arab Emirates, Kuwait, Qatar & Bahrain–all either monarchies or military dictatorships.

The US provides “intelligence & logistical support”–an operational function that likely covers a multitude of war crimes–& accelerated the sale of weapons to the regimes involved. Britain facilitated a steady supply of 500-pound bombs to Saudi Arabia.

These air forces have been pounding Yemen since March 26th so that now over one million people across the country have been displaced, an estimated 2, 288 have been killed, & at least 10,000 injured. The UN refugee agency (UNHCR) said 41,000 people have fled the country including 10,000 in squalid refugee camps in Djibouti where medical conditions are so poor that diseases like Dengue fever are becoming a major problem.

The political scenario resonates with what happened in Syria where a revolution against a tyrannical regime was turned into a civil war. From the point of view of US dominance, chaos is far preferable to social revolution. The Pentagon is right at home with dictators; it cannot tolerate democracy.

Much political analysis has been impressionistic or uses the methods of libertarianism which sees elite intrigues behind everything & has no respect for popular democracy. They see the conflicts not as between contending classes but between cabals. Such analyses held the Arab uprisings in contempt, regarding them more as agent provocateur street theater than popular defiance against tyranny.

If you don’t understand what the hell is going on, it’s difficult to know what to do in solidarity. The only certain response is to re-build the international antiwar movement demanding the US, Saudi Arabia, & all their military allies stop the bombing & immediately withdraw all forces, advisers, weapons, “intelligence & logistical support” & leave the people of Yemen to resolve their own disputes.

Our fullest solidarity with the people of Yemen whose uprising held such promise & showed their magnificent spirit of democracy. Our deepest regrets that they stand alone against such military might.