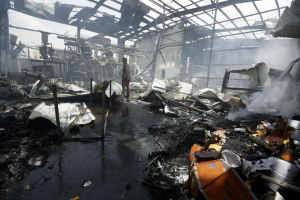 Some call the nearly year-&-a-half Saudi-led, UK & US-backed carpet bombing of Yemen ‘the forgotten war.’ But it is not so much forgotten as almost completely unreported by media–just like India in Kashmir & like the wars & bombing in Afghanistan, Pakistan, Libya, Iraq, Somalia, or the deployment of US troops to central African & Central American countries. What news we get from Syria is a garbled medley of deceits & propaganda.

This rare photo is a snack food factory in Sana’a, Yemen taken out by Saudi coalition bombers because junk food is such a threat to military & political hegemony in the region. They aren’t showing the homes, hospitals, mosques, schools taken out by bombers.

There is no political mission more imperative for our generation than to rebuild the international antiwar movement demanding the withdrawal of all foreign militaries & the grounding of every drone & warplane. The future of the human race depends upon that movement.

Our fullest solidarity with the people of Yemen. May we make that solidarity an active one before the country is bombed to smithereens.