Comedian Sarah Silverman introduced Bernie Sanders to the Los Angeles rally last night that drew 28,000 people. She praised him for his “moral compass & sense of values” that always “put him on the right side of history.” Just like Silverman, who signed a public statement in the midst of Israel’s carpet bombing siege over Gaza (last summer) supporting Israel by saying “Hamas cannot be allowed to rain rockets on Israeli cities.”

Israeli apartheid is what yokes the comedian & the shill. That’s the problem of lesser-evil politics. You lay down with dogs, you get up with fleas.

This post from August 24, 2014 explains the statement Silverman signed: 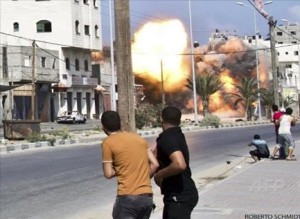 Creative Community for Peace was founded in 2011 as a pro-Israel, anti-BDS group of music executives & agents to counter the growing influence of Palestinian solidarity & the refusal of prominent entertainers to perform in Israel. The executives who run CCFP orchestrate the careers of people like Aerosmith, Celine Dion, Lady Gaga, Jennifer Lopez, Justin Timberlake, Justin Bieber. When media announced the formation of CCFP, the headline read, “Music moguls to artists: Don’t boycott Israel” which could be taken as a threat.

Though the website has a flashy video announcing “Music speaks its mind & knows no borders” & has a petition titled “Don’t Let Israel’s Detractors Politicize Art”, the group was formed to support Israel, defame Palestinians, & counter the influence of BDS among performers. It’s not about bringing people together with music but an attempt to hijack pop culture in the service of Israeli apartheid. As one of the organizers said at the founding meeting, “It’s all a question of image. For many in the younger generation, being associated with the anti-Israel cause can be way more cool.” The cultural attache for the Israel Consulate who was also at the founding meeting said, “We need to make Israel cool.”

CCFP spokespersons claim BDS is about ‘undermining Israel’s right to be a state for Jews’. In fact, the BDS campaign organizers accept the 1967 borders & a two-state solution. Many BDS activists do not accept those borders, think the very concept is a dried up old prune, & believe Palestinian justice demands a democratic secular state where Jews & Palestinians live as brothers & sisters.

No one challenges the right of Hollywood performers & agents to be politically reactionary; this is still a free country, as they say, so you can be as stupid as you like. But you’d have to be naive not to recognize there is coercion involved–the kind of coercion that forced Penelope Cruz & Javier Bardem to back down on their outspoken support for Gaza, the kind of coercion that says (sub rosa, of course) “support Israel or you’ll never work in this town again.”

What is most despicable about this public statement from CCFP is the claim “Hamas cannot be allowed to rain rockets on Israeli cities, nor can it be allowed to hold its own people hostage. Hospitals are for healing, not for hiding weapons. Schools are for learning, not for launching missiles. Children are our hope, not our human shields.” Eely-Oily Weasel writ large!

CCFP says they’re heartened at the enormous response in the industry to their arm-twisting & expect the list of signatories to grow beyond the little group of right-wing flunkies whose flagging careers are all washed up. That only means they’ve got some real muscle planned. So while they support Israeli apartheid with bully-boy tactics, let us continue to reach out to the highest aspirations of human beings for peace & justice. We don’t hold the young in such contempt & don’t think it’s about making BDS cool but about making apartheid decidedly uncool & making justice prominent in the hearts & minds of young & old.

This is a photo of Gaza City yesterday where Israel continues it’s bombing rampage. CCFP wants musicians to provide the music score to this carnage.