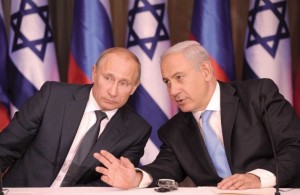 Those who support Russian military involvement in Syria need to take a big step back & reevaluate that position. According to the Israeli website DEBKAfile, Russia & Israel will begin conducting joint military exercises over the Mediterranean this summer “to deepen the military ties between the Russian & Israeli armed forces.” The joint maneuvers will involve the Israeli & Russian air forces & navies. (DEBKAfile is an Israeli military intelligence website run by two journalists whose information is from unidentified military & intelligence sources. It has been awarded two Forbes’ magazine “Best of the Web” awards.)

This was agreed upon between Putin & Netanyahu when they met earlier this month in Russia. The heads of Mossad & IDF military intelligence also participated in the June 7th meeting. Russian warplanes will take off from a Syrian airbase & warships deploy from two of their naval ports. Israel will use two military facilities in Israel to coordinate the exercise. Ahead of the joint exercises, “the joint mechanism that coordinates Russian & Israeli air flights in Syrian airspace will be expanded.”

The agreement for military collaboration was tied to allowing Russian gas companies to compete for contracts on two offshore gas fields in Israel. Putin argued that the presence of the Russian navy & air force in the area “would guarantee that no Arab or Muslim military force, such as those of Iran, Syria & Hizballah, would attack the gas fields.”

DEBKAfile called this a historic decision spelling the end of the “unique relationship” between the Israeli & US militaries & will help Israel become less dependent on the US. Does it make a shred of sense that Israel would endanger the billions of dollars in US military & economic aid & its massive US political support apparatus by developing this new military alliance with Russia? Should it be at least considered that propping up the violent Assad dictatorship is in the–albeit, conflicting–interests not only of Russia but of Israel & the US?

Does anyone who supports Russia in Syria see how threatening this military alliance with Israel is for the Palestinians? And for the Syrians? And for the entire Middle East? Israel recently made billions of dollars in agreements with China to counter BDS. It has the US, China, Russia, Egypt, Jordan, Syria aligned on its side to support a Jewish-only state & eliminate the Palestinians. Those who think militarism is a solution in Syria need to come to their senses or they will end up not just on the wrong side of justice but on the side of Armageddon.

(Photo is Putin & Netanyahu at their June meeting from Al-Masdar News. Soon we will see Putin in the obligatory photo op with Shimon Peres.)