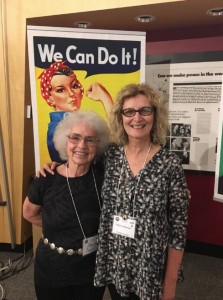 The woman on the left is my older sister Joni and on the right is Gladys McKenzie at a reunion of those who organized the union at the University of Minnesota. Joni began political activism in the civil rights movement in the mid-60s & drew me into it. She has been active in women’s rights, the antiwar movement, civil rights (including for Native Americans), & other causes. After visiting me in NYC where I was active, she once got me temporarily disowned by my mother after telling her we marched for gay rights. She is more a Sanders kind of socialist. Browbeating her out of that perspective hasn’t proven fruitful. She remains a profoundly political woman.

Gladys is also a lifelong activist & socialist. Most notably, she organized the Minnesota contingents to a major abortion rights national march in Washington, DC in the 80s which drew nearly a million people; headed up the successful union drive at the U of M & remained an active trade union leader until retirement; & generally plays a leading role in the left movement in Minnesota politics.

Joni will be 75 years old in a few months; Gladys who recently retired is still a kid. We should take a moment to tip our hats to their lifetime commitment to social transformation.