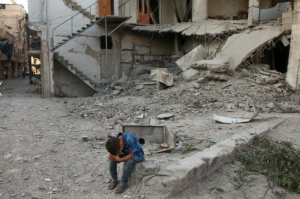 A young boy near the rubble of buildings after Russian bombing of Arbin, a town outside Damascus frequently bombed by Assad forces.

Arbin was designated one of four “de-escalation zones” in a deal reached last May between Russia, Iran & Turkey. Within these zones, militias & Assad forces were to maintain a ceasefire, including air strikes, for six months. Russia would continue to fly over the areas but not conduct bombing operations, the Syrian government would allow humanitarian aid into the area without bombing it, & public services like electricity & water would be restored. In the Eastern Ghouta zone where Arbin is located, there are an estimated 690,000 civilians.

US, Russia, Iran, Hezbollah, & all other foreign military forces out of Syria. Out now!