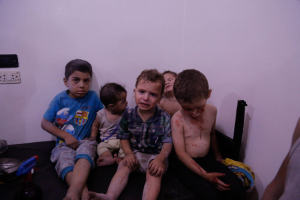 Some of the 45 children injured in air strikes last Sunday on Arbin, Syria, designated a ceasefire zone by Russia. They are waiting in hospital to be treated. Five children were killed.

US, Russia, Iran, Hezbollah & all foreign military forces out of Syria. Bombers, special forces, & paramilitary militias have never been freedom fighters & they are decidedly not in Syria.