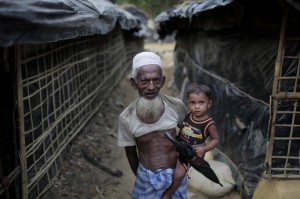 The scale of inhumanity & barbarism toward the Rohingya is finally being exposed for all the world to see. And the crimes involve several regimes. While there are still up to 4,000 Rohingya adrift at sea, the big-assed Indonesian military can’t get helicopters out there scouting for them or ships to rescue them. And in Thailand, close to the Malaysian border, they’ve found several concentration camps with dozens of graves believed to contain bodies of murdered Rohingya.

Last week, the president of Ecuador offered assistance & refuge to those adrift in the Andaman Sea. No sightings yet of Ecuadorian ships looking for stranded Rohingya. Big talk doesn’t cut it.
The president of Gambia has offered refuge to the Rohingya but you’d have to think twice about moving to a country just recovering from the Ebola epidemic where over a third of the people live under US $1.25 a day–especially when thousands of Gambians are risking their lives to immigrate to Europe.

In 2012, when Rohingya were sustaining a violent siege, thousands fled to Bangladesh & were forcibly turned away by border patrols. There are already an estimated 250,000 Rohingya in exile in Bangladesh but only 32,000 of them are registered with the UN refugee agency. Being unregistered means you’re on your own & don’t get the miserly assistance handed out by the UN. Of course neoliberalism, the barbaric phase of capitalism, has created so many millions of refugees it must be near impossible for the UN to keep up with aid–especially when they’re also bankrolling troops like in DR Congo & Haiti.

Now the Bangladeshi government has announced they will relocate Rohingya refugees from camps near the Myanmar border in order to accommodate a neoliberal gentrification scheme turning the area into a tourist zone. There will be those who ask “Why should refugees be allowed to stand in the way of development?” And the answer is, “Development for who?” Bangladesh is a sweatshop haven with a large number of billionaires & millionaires, many who made their fortunes in real estate & all who made it in grand larceny & exploitation of labor. Nearly 35 percent of Bangladeshis live below that lousy US $1.25 poverty line. None of the poor will derive a penny out of that resort.

But the ugliest thing of all is that the Bangladeshi regime is preparing to move the Rohingya to Hatiya Island in the Bay of Bengal. Is there any infrastructure for them to earn a living? Probably not, since the island is frequently subject to cyclones & tsunamis. A UN official said the forced relocation would be “very complex & controversial”. You bet your sweet ass it would be; right along with cynical & genocidal.

The UN should muster up a little more that a plaintive rebuke & do something to stop this barbaric madness. Forced relocation has been condemned umpteen times in human history–unfortunately decades after they were carried out. Originated in colonialism, they have found new purpose under neoliberalism.

This photo is a senior Rohingya with his grandson standing in one of the squalid refugee camps in Ukhiya, Bangladesh.