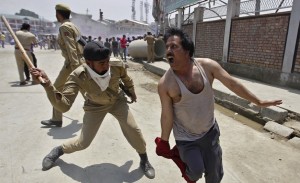 What terrible crime could this unarmed man in Srinagar, India have committed to provoke the cop into beating him so violently with a truncheon? Did he assault a defenseless woman or senior? Did he steal someone’s handbag or try to pick someone’s pocket? Or did he do much worse? He must have done something worth a good beating since India is the “biggest democracy in the world.”

Well it’s quite disheartening to learn that in such a bastion of democracy & due process the fellow being beaten is a government worker protesting to regularize their employment from temporary & contractual to permanent work which probably has some benefits involved. They also demanded payment of wages in arrears. Since 1994 they’ve been working as day wagers despise promises their work would be regularized. It’s a mystery why such a democratic regime would go after such protesters & striking workers with heavy tear gas shelling & truncheons.

Perhaps someone from Kashmir can explain to us why workers have been striking over these same issues for years without resolution? The workers have been intransigent against extreme police belligerence, including the use of water cannons with toxic purple dyes.

Our deepest respect to these government workers for their determination.