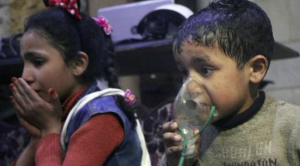 So Robert Fisk, as always, embedded up the ass of the Syrian army, goes to Douma (now occupied by Russian & Syrian troops) on a mission: to disprove allegations of a Syrian chemical gas attack on civilians. Those who want to believe his reports hang on his every word & call him a highly respected éminence grise in the world of journalism about the Middle East. Those repulsed by his orientalism, contempt for the Arab Spring uprisings, & support for the Assad regime find him something of a wreck as a journalist & of not much value as a propagandist. The guy’s Islamophobia isn’t subtle. It hits you, or at least it should, like a Mack truck in his writings on the Arab Spring uprisings–of which Syria is a part.

So our man enters Douma, alights from the military convoy, & hotfoots it to a doctor someone (from the regime?) has referred him to in one of the underground clinics. We won’t question the good doctor’s medical credentials but a worthy journalist might have when Douma is under military occupation by both Russian & Syrian forces. If he did serve in hospitals during the alleged chlorine attack, he may be reluctant to speak whilst Russian & Syrian soldiers are breathing down his neck & when Fisk rode into town with a convoy of them. Fisk doesn’t say how long the discussion went on but it was long enough for the doctor to say that the video of children foaming at the mouth was real but it wasn’t caused by a chlorine attack. It was hypoxia caused by oxygen starvation from living in underground tunnels & basements choked with dust & debris. Then the conversation switches to jihadi terrorists, the non sequitur suggesting that it was the terrorists who drove them underground rather than massive bombing by Syrian warplanes. That Fisk is slick.

Fisk does mention that the regime has barred the Organization for Prevention of Chemical Weapons (OPCW) from entering Douma to investigate the chemical gas allegations. But the regime has nothing to fear from Fisk revelations so he walks about Douma interviewing random citizens. He reports a great deal of nonchalance & perplexity about the gas attack to suggest that it didn’t happen. Does he think residents under occupation would be forthcoming with a journalist embedded up the ass of the regime? He asks, with awe-inspiring imbecility: “How could it be that Douma refugees who had reached camps in Turkey were already describing a gas attack which no one in Douma today seemed to recall?” How could it be that refugees out of harm’s way from the regime feel free to say what Syrians under occupation play dumb about? Is our man so credulous a fool that he has to ask?

He got his chops in against the White Helmets, actually reporting that panic at the clinic about a gas attack was set off by a White Helmet shouting “Gas” like shouting fire in a crowded theater. He also mentioned, as if it were damning, that every member of the White Helmets in Douma left in the convoys “with the armed groups,” as if only terrorists were being evacuated & not that thousands of civilians were being forcibly evacuated or on the run. Since Fisk travels in Syria with the army, does he think the White Helmets, a thorn in the side of the Assad regime, are advised to trust Russian & Syrian troops in Douma? Does he think they should stick around & tempt fate or risk the gulag? What doesn’t Fisk understand about war, occupation, revolution & counterrevolution?

Those who want to believe Fisk will believe him, no matter how tawdry & pathetic his journalism. But those with an ounce of journalistic discretion will question his narrative & recognize his rubbish for what it is: tendentious & propagandistic.

Photo is children in Douma on respirators from chlorine gas attack.