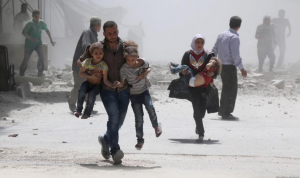 In the end, you can cut through all the propaganda, deceits, & war mongering about Syria by asking if there was in fact a Syrian Arab Spring uprising in 2011. Of all the Arab uprisings that year, certainly the most documented was the Syrian one. Every day, hundreds of videos were uploaded to YouTube by participants in those protests. They showed hundreds of thousands of unarmed protesters pouring into the streets across Syria against the Assad dictatorship. It was turned into a civil war when the Assad regime began to attack those protesters with artillery & aerial fire. That revolution is on the last legs of its existence because of the counterrevolutionary might of Syria, Russia, Iran, the US coalition, other military forces, & the hundreds of militias armed by foreign powers who use those militias to obfuscate the thrust of the revolution against Assad. That is the fundamental reality.

One can pretend, as Assad’s professional propagandists do, that the Syrian Arab Spring never happened. Or one can claim that it existed briefly but that opposition to Assad is now ‘head-chopping jihadi terrorists’. But the sole purpose of those claims is to justify support for Assad’s national sovereignty & right to self-determination, support for Russian & Iranian intervention, & claims that the war is a US regime change operation. Of course, the right of self-determination for dictators is a novel, grotesque concept, one that only an amalgam of fascists & Stalinists could conceive. The ideology of Assadism is indistinguishable from that of the war on terror, rooted as they both are in Islamophobia & hysteria.

If you refuse to believe there ever was a Syrian Arab Spring, you only have to go to YouTube. It’s unfortunate that when that uprising against dictatorship unfolded in 2011, you were not paying attention. Because if you were, you would have noticed that all of the Arab Spring uprisings were denounced as orchestrated by the US & Israel in libertarian & fascist journals like Global Research. Global Research is the trough that feeds all the Islamophobic, anti-Semitic, libertarian, & fascist narratives which have so corrupted political discourse in our times. If you refuse to believe the Syrian Arab Spring still stands, there are many reliable sources showing that it does, although on feeble legs because it has been so vilified as terrorist. Willful ignorance is a political stance that has brought many into the sphere of fascism-cum-Stalinism. If one is part of sustaining the Assad dictatorship, one is on the wrong side of history. Regrettably, on the fascist–in the full sense of that word–side of history.

Photo is one of thousands of bombing attacks on the Syrian Arab Spring uprising.