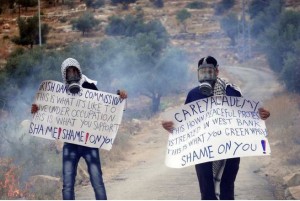 The recent allegations from organizers of the 1st Israeli Feis, a traditional Irish dance troupe, against the Ireland Palestine Solidarity Campaign (IPSC) are something that need to be taken very seriously. They cancelled their performances in Israel claiming IPSC activists threatened to kill everyone participating in the event by shooting them in the head.

The growth of BDS & Palestinian solidarity around the world is an alarming development not just to Israel but to neoliberal plans for the entire Middle East. Zionist forces are mobilizing to counter BDS in a many-pronged assault. Big money & big political forces are involved. The Israeli law firm, Shurat HaDin, is planning a legal offensive against BDS activists & organizations to tie up resources & activists; campus anti-BDS groups are being organized & bankrolled with big money; state legislatures are formulating anti-BDS bills; politicians & candidates like Obama & Hillary Clinton are publicly committing to oppose BDS; Bono & other celebrity shills for neoliberalism are staging extravaganza tributes to the likes of Shimon Peres, the former president of Israel during Operation Ethnic Cleansing; & the Irish dance ensemble are fabricating accusations, for which they haven’t a shred of evidence, to discredit BDS campaigns.

If in fact the Irish dancers were threatened as they claim, they ought to prosecute. No one should be subject to death threats for dancing the Irish jig in Israel or for anything else. But for criminal prosecution, evidence is required. And that doesn’t exist because it never happened–unless Mossad operatives impersonated IPSC activists, which is a possibility. But it’s enough to discredit BDS by circulating slanderous accusations–accusations which have the hand of the Israeli Embassy in Ireland written all over them.

This is the time to review or google COINTELPRO, the FBI program used for decades to spy on & cause dissension in political movements in the US. There’s no trick too loathsome, too lowdown for police agents to use to discredit & destroy social justice movements. These police programs exist in every country. The only reason we know about COINTELPRO is because activists went after them in the courts & at a weak moment in judiciary history, the FBI was exposed.

BDS is touching a central nerve in Israeli apartheid & in neoliberal control of the planet. Of course it will set off a furious offensive. When these accusations are made, they must be exposed for the horse manure they are against Palestinian solidarity.

This photo is Palestinians in the occupied West Bank fleeing Israeli tear gas & asking 1st Israeli Feis to do the right thing. There’s no hint of a threat to the dancers nor did IPSC activists issue ultimatums. Asking insistently on a FB wall or in a picket line is not a threat; it’s called democracy.

The only worthy political response to this barrage is to build the hell out of the economic, cultural, & academic boycott of Israel & continue to defend Palestinian justice.