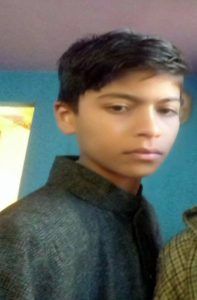 This is Musharaf Fayaz, the adolescent boy who sustained head injuries, damage to both eyes, & internal hemorrhaging from a live shell explosion during the Indian Army’s hunt to kill operation in the Shopian district of Kashmir last week. The young boy was in front of his family home & his father witnessed the assault. He died today in the ICU SKIMS Soura Hospital.

His funeral prayers were attended by so many thousands that, as is often the case in Kashmir, they had to be held more than once. The funeral cortege is also protest under military occupation & mourners paid tribute to his life by chanting for freedom & against the occupation. He was laid to rest in his ancestral village at Datmudoor. May his sweet soul Rest In Peace.