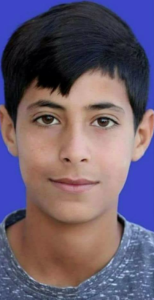 This is 16-year-old Palestinian Laith Abu Naim who was shot in the head last Tuesday by an Israeli soldier in the occupied West Bank. Nineteen Palestinians, mostly protesters, have been killed by Israeli troops just since December when Trump declared Jerusalem the capital of Israel. It isn’t confirmed how many of the nineteen were shot in the head but it’s likely most were young people shot with live ammo, several directly in the head. It’s not an accidental thing but a strategy of war & occupation to target youth. Nor is it an accident that so many die from bullet wounds to the head. Just last week, Indian occupying troops in Kashmir killed four (including 12-year-old Najar Mushaira Fayaz killed by head injuries from a live shell) & seriously injured five other young people by bullet wounds to the head. It’s relevant to note here that India contracted with Israel to train paramilitary forces for Kashmir & for use against political resistance in India.

An Israeli army spokesperson blamed the nineteen executions on ‘violent rioters’ & stone pelters. But Palestinians fighting unarmed against occupation, the razing of entire villages to make room for Israeli settlements, & the violent expropriations of their lands are not rioters. They are freedom fighters.

Laith Abu Naim was laid to rest in his ancestral village of Al-Mugheer near Ramallah. Hundreds of residents chanted for freedom as they mourned & laid him to rest. May he Rest In Peace after spending his short life fighting for freedom.

No to Israeli apartheid. No to ethnic cleansing. End the occupation of Palestine. Self-determination & a democratic secular state.