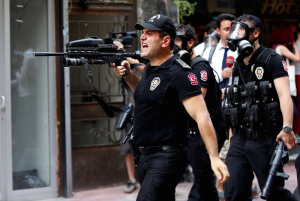 These riot police in Istanbul, Turkey are using rubber pellet guns & water cannons mounted on armored vehicles to disperse unarmed LGBT rights activists after the march was banned by the government.

The very same kind of assault took place on last year’s LGBT march & both times major media have questioned why & have answered tentatively it is because the protests coincided with Ramadan–which the Guardian-UK says “could have caused conservative Muslims to bristle.” The Guardian article also noted that while homosexuality is not a crime in Turkey, homophobia remains widespread “as it is in most other Muslim countries.” The Guardian didn’t note that it isn’t a crime because of the heritage of the Muslim Ottoman Empire which legalized it in the 19th century. They perhaps thought they needn’t mention that homophobia is widespread everywhere & homosexuality isn’t fully legal in most countries, including the US.

Media must think there’s some merit in playing stupid. The Erdogan regime has been using extreme violence against democracy protesters & against media since 2013. That’s the political character of the regime & that is likely the reason the LGBT marchers were attacked.

As a postscript, it is particularly grotesque that some actually look to Turkish bombers to free Syria from Assad’s dictatorship & Russian bombers. Of course it should also be noted that under Putin, for the past several years, there has been a crackdown & violent attacks on LGBT activists after Christian Evangelists helped implement new anti-LGBT legislation.

LGBT rights are human rights. Our solidarity with those around the world who stand up against violence to demand them.