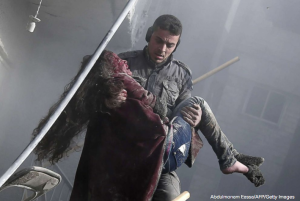 People who don’t understand the disputes over Syria speak of balance & false binaries & insist that in the end we all want the same thing. No we don’t. Nothing will put this movement back together again. It’s a rude awakening but you cannot play both sides of the street when the polarization is revolution versus counterrevolution.

Do you stand with the Syrian revolution of working people against Assad’s gulag, forced disappearances, torture, repression, death squads & summary executions? Or do you stand with Assad’s military counterrevolution taunting the revolution as a lie & opposition to him all head-choppers? There is no proxy regime change war against Assad. It is an outright war against the revolution where Russia, the US-coalition, & the most repressive forces in the Middle East play their part because counterrevolution is the one thing they agree on.

A revolutionary victory against dictatorship in Syria would resonate & change the relationship of forces throughout the world to the advantage of the oppressed. The Syrian revolution is the last one standing of the Arab Spring, so mercilessly were the others reversed by the same counterrevolutionary forces. A defeat would be catastrophic throughout the Middle East & leave Palestinians more isolated than ever.

Those who blither on about vilifying Russia, who claim Israel’s schemes for expansion are behind the war in Syria, who rattle on about Wahhabism, Salafism & other things they know nothing about, who rail against US death squads but cheer on Russian bombers, have become the Greek chorus for Assad’s counterrevolution. They turn principled politics into parody & make a mockery of revolution against dictatorship. Those who take politics seriously face the harsh reality that when it comes to uncompromising opposition between revolution & counterrevolution there is no middle way.