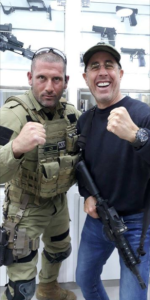 Turns out Jerry Seinfeld isn’t just a washed-up comedian. He’s a complete dirtball. After performing in Tel Aviv, he took his whole family to an anti-terrorism theme park in Israel to learn how to hunt Palestinians in what Israel calls ‘military tourism.’ The camp they attended to learn how to snipe & use attack dogs against Palestinian protesters is located in the occupied West Bank. He also visited an Israeli airbase from which bombers deploy over Gaza & made one of his lame-assed jokes about the fun of bombing. Color him putrid.