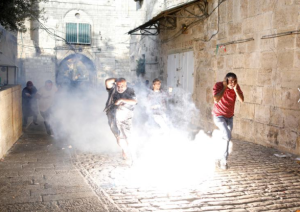 Reuters news service has broken its silence about the Israeli siege & occupation of the Al Aqsa compound in East Jerusalem by posting this photo of Palestinians running from an assault by Israeli troops outside the compound. They said this took place “after Israel removed all security measures it had installed at the compound.”

True enough Israel removed the metal detectors & surveillance cameras but they then increased patrols within the sacred site & placed snipers on the roofs. That’s not an end to the siege & occupation but an escalation. The Noble Sanctuary is a sacred religious site to Palestinians & has been for over 1,300 years. Jews & Christians have absolutely no claims to the site that aren’t manufactured to justify colonialism. Israel is attempting to desecrate & eventually destroy the site in order to build a temple there based on a pipe dream about Solomon’s temple & the Ark of the Covenant–showing that they watch too much racist Indiana Jones & read not enough history.

End the occupation. Self-determination for Palestine.