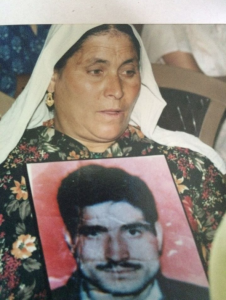 We should take a moment to honor Kashmiri Rehti Begum, the mother of a son forcibly disappeared by the Indian occupying army. Rehti died yesterday from a heart attack. She was an active member of the Association of Parents of Disappeared Persons since it began in 1994:

With immense grief, we regret to inform you that Rehti Begum, 70, one of the trustees of Association of Parents of Disappeared Persons (APDP), passed away Thursday morning 26 April 2018. She died of heart attack.

Rehti Begum who lived in Cheke Kawoosa Narbal, Budgam, was the mother of Mohammad Ramzan Sheikh. Mohammad Ramzan was a daily wage labourer who was subjected to enforced disappearance after being abducted from his home by the personnel of Central Reserve Police Force in 1990.

Rehti was an active member of APDP since its inception in 1994, who would regularly participate in the monthly sit-ins at Partap Park.
Her dedication to the cause of enforced disappearances remained undeterred until her last breath. Even though her search for her son remains unfulfilled, we the Association of Parents of Disappeared Persons (APDP), pledge to carry on with her unresolved search for her son on her behalf and take it forward to its fruitful end.

We lost Dilshada Shiekh, Moghal Maas, the single mother of Nazir Ahmad Teli who kept her search alive for her only child; Misra Begum, mother of Shabir Ahmad Ghasi; AbdurRazaq Dar, father of Mehrajuddin Dar, and many others.