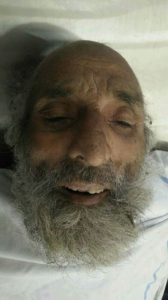 This is a man named Habibullah who was in his mid-fifties & had learning disabilities. He was shot dead late last night when he crossed into a security area near an Indian air force base in Budgam district of Kashmir & refused to stop after warning shots by the sentry. Habibullah was not wearing any footwear or proper clothing for winter. He must have been extremely disoriented to be walking around barefoot in the cold in the middle of the night.

One given to apologetics could say, ‘Well the sentry didn’t know if he was dangerous or not. He might have been a terrorist.’ Those given to justice would say that the military has no right to recklessly shoot down someone before determining whether the person is dangerous or not or if he is a fellow in need, someone disoriented who needs to be identified so his family could come get him. But that isn’t how military occupation works. They shoot first & ask questions later because it is a matter of indifference if innocent civilians, including children, elderly, those with learning disabilities get killed. Actually, it would be more accurate to say that killing civilians isn’t a matter of indifference but fundamental to terrorizing a population into submission.

May Habibullah Rest In Peace. Our sincere condolences to his family & friends.