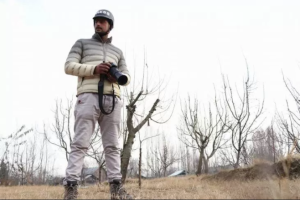 Kashmiri photojournalist Kamran Yousef has been in jail without charge since September 2017. On January 18, 2018, he was charged by India’s National Investigation Agency (NIA) with being a stone pelter & accused of “conspiring to wage war against the Government of India” by carrying out “terrorist & secessionist activities” in Jammu & Kashmir. The Press Council of India, the Kashmir Editors Guild, Kashmir Young Journalists Association, the Network of Women in Media, India (NWMI), the Committee to Protect Journalists, & the International Federation of Journalists have issued statements demanding his immediate release.

Now it is time for us to move into action & build a broad international defense campaign to get him released from prison & all fabricated charges dropped. His real offense is that as a photojournalist he covered protests against the occupation & funerals of those executed by Indian occupying forces.

Please like & share this FB wall. If you have ideas for how to build this campaign, for groups or individuals to reach out to, for places to campaign, please post them on the wall.

This is a WordPress defense campaign wall where information will also be posted: https://freekamran.wordpress.com/2018/02/18/the-journey-begins/comment-page-1/#comment-6