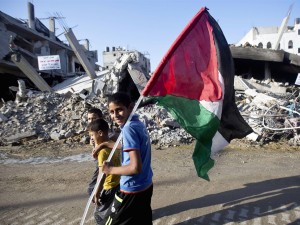 These boys are walking past the Shejaiya neighborhood in Gaza City, an area where Israel employed a scorched earth policy, including bombing a marketplace during one of the umpteen ceasefires they broke.

The purpose of Israel targeting children & “Hamas age” young men was to destroy & demoralize the spirit of intifada which they have not been able to do in over 66 years. Israel succeeded in igniting an international solidarity movement of hundreds of thousands in hundreds of countries; of stirring governments from political torpor & silent collusion in response to popular pressure to actually take measures against Israel (even if it it’s still in the lip service stage); & in bringing into action the divestment part of Boycott, Divestment, & Sanctions, with many companies canceling contracts with Israel. Nice work Netan-psycho-yahu!

As for Palestinian intifada? Resistance in the time of genocide stands undefeated.