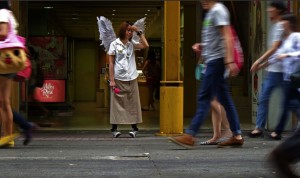 Anyone who’s ever worked a minimum wage job (often where you stand for hours) or been forced to wear a demeaning uniform on the job, knows exactly how this young woman in wings feels. She works in the fashion district of Taipei, Taiwan where people buy their haute couture & she’s forced to dress like a clown.

In a humane society such uniforms should be outlawed but if justice existed they’d be just the thing for war criminals like Henry Kissinger, Pinochet, or Omar Suleiman. In place of the accoutrements of power they’d be strutting round their cells in maid uniforms. It’s an idea whose time has grown old with impatience.