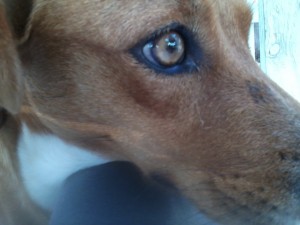 A few days ago, I picked up this soulful little girl skulking down the street, looking bereft. She weighs a lot but I managed to get her into the car despite my dogs yapping at her out of fear.

She appeared at first to be pregnant but then I realized she had already given birth & that her teats were bloated with milk.

None of the usual rescue groups could take her & my little scruffy group was unreconciled to her presence. They constantly circled her & barked, though she only once displayed annoyance by snapping back. She was a beautiful, even-tempered girl.

It wasn’t possible to keep her & excluded that I would release her. So today I took them all to the dog park where I was sure to find someone who would know exactly what to do.

The only person there was Christina, a retiree, with her two rescue dogs. She & her husband also have 31 rescue cats. That’s her mission in life. She suggested I take the dog on a leash to the place I found her & let her lead me to her puppies. I could learn that way whether she had been abandoned or simply lost.

I took Christina’s advice & followed our girl until she stopped & wouldn’t go further.There was no gate on a rather shabby house so we walked to the backyard where a family was playing with six black puppies. Immediately, they recognized our girl as the mother & put the puppies on her to suckle. They think she may be a reluctant mother. They may not be so enthusiastic themselves since they had no name for her. But I’m hoping this rescue has a happy ending. They don’t all. Which is why I have 7 more dogs looking for a loving family.

Picture is our girl who we can call Serene.