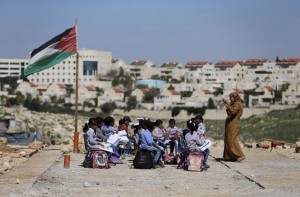 Zionists take great umbrage at comparisons between Israel & Nazi Germany so they’ll probably really get bent out of joint by more than apt comparisons between forced resettlement policies of Palestinians by Israel & those of colonization in the Americas & of Joseph Stalin in the former Soviet Union. Bristle or not, the comparisons are inescapable in describing Israeli policy since the founding of the state of Israel toward Palestinian Bedouins, increasing after the illegal Israeli occupation of the West Bank in 1967.

Bedouins were nomadic people making their livelihood by seasonal migration & grazing livestock when the new state of Israel began forcibly relocating them to the West Bank & restricting their access to grazing lands. They had no recourse but to develop permanent settlements. There are many instances in the history of colonialism where nomadic peoples have been forced to abandon their way of life. It’s a profound cultural & economic devastation. Palestinian Bedouins have given wrenching testimony to that.

After the 1967 military occupation of the West Bank, Israel began moving in Zionist settlers to the region occupied by Bedouin settlements & displacing whole communities once again. After the massive swindle & outright betrayal of the Oslo Accords in 1995, Israel accelerated forced relocations of Bedouins. For the past several years, after Israel took over 60 percent of the West Bank, designated as Area C in the Oslo Accords, their treatment of Bedouins has been one ruthless human rights crime after another.

This is a photo of Palestinian Bedouin school children being taught al fresco since Israeli bulldozers demolished the caravans & shipping containers they used as school rooms. The Israeli army told school officials the containers were removed because they did not have an Israeli-issued construction permit to be in the area. What a mockery of international law since under several of its provisions, Israel has no right to occupy any part of Palestine. It is also in violation of the Oslo Accords which mandated Area C be handed back to Palestinian jurisdiction by 1999. But this class room is in Al-Eizariya, a village in Area B, which is under Israeli occupation but according to the Oslo Accords is administered by the Palestinian Authority. So why do Palestinian schools here require an Israeli building permit?

In the background of this photo is the Israeli settlement of Maale Adumim founded in the 1970s by Gush Emunim, a rightwing Zionist movement committed to setting up Jewish settlements on Palestinian lands & committed to ethnic cleansing of Palestinians. They claimed God deeded them Palestine in the Torah & as nuts as that claim is, it does not distinguish itself from justifications given for exterminating Native Americans or for Stalin’s massive relocations of entire nationalities.

Tens of thousands of Bedouins are being forcibly evicted to make room for expansion of Maale Adumim which is only a few miles from Jerusalem & has become a commuter suburb. For many years, at least twenty Bedouin communities near Maale Adumim have been demolished & residents forced to relocate to near the Abu Dis municipal garbage dump for Jerusalem in the village of Al-Eizariya, which is of course also occupied by Israel. What kind of corruption & cynicism would relocate people to near stinking mountains of trash!?

The apartheid wall crosses the main road of Al-Eizariya, affecting commerce & social life in a town which has become overcrowded as a result of Bedouin relocations. Palestinian agricultural land in the area has been confiscated or cut down by Israeli authorities to accommodate the expansion. But it isn’t explained whether that’s the expansion of Israeli settlements or that caused by forced relocations.

Honoring & building the economic & cultural boycott (BDS) of Israel is the most effective way to oppose Israeli colonialism. Buy nothing with barcode beginning 729.