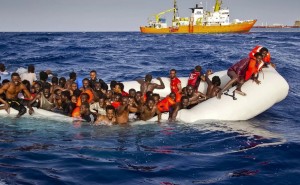 Media has been almost dead silent on African refugees for the past year. Not just because Syrian refugees became central in the news but because Frontex, the EU border patrol, launched a naval operation to stop refugees from crossing on the north Africa to Europe routes. There were warships from several nations cruising the sea to thwart them. There weren’t more than a few photos or reports in the entire year when previously there were hundreds, probably because they wanted their methods of thwarting to be secret. The silence was outright suspicious since we knew there were tens of thousands of refugees in countries like Libya & Morocco waiting to cross the Mediterranean on the Italy & Spain routes.

In just the past few weeks, since Frontex navies focused on the Aegean Sea to thwart Syrian, Afghan, Iraqi, & other Middle Eastern refugees, there is renewed media coverage of the Africa to Europe routes. It is likely a bait & switch approach to take our attention away from their martial operations against refugees in the Aegean.

The photos they’re showing now are rescue operations of mostly African refugees. Since we know from UN refugee agency figures that as of about a month ago, less than 10,000 refugees from African countries had registered in Italy & Spain, it’s curious that now nearly 26,000 have, mostly in Italy & less than a thousand in Spain which previously had thousands. Part of the reason is Spain’s draconian new security law directly targeting refugees.

This sinking dinghy is off the coast of Lampedusa, Italy where there is a refugee processing center. Hundreds have drowned off this coast with local fishermen accusing Italian coast guard ships of intentionally botching rescues. Lampedusa is also the place where the mayor & local residents have welcomed & assisted refugees & publicly criticized the Italian government for its barbarisms toward refugees..

The men on this dinghy are crying for help & looking to the photographer’s boat for rescue but the caption says the ship behind them is ‘approaching’ them. It can’t be assumed approaching them means rescuing them.