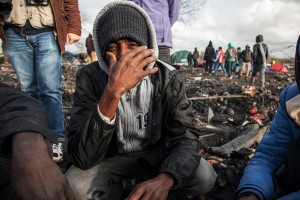 You know those “western values” that Obama & European politicians are always talking about? In addressing the massacre at Orlando, Obama described them as the “fundamental values of equality & dignity that define us as a country.” Actually, that probably isn’t how the US & Europe are characterized by other peoples–especially the ones being bombed. The real character of those vaunted ‘western values’ is made crystal clear in the barbaric treatment of refugees.

This image from Camp Jungle at Calais is part of an exhibition where refugees photographically tell their own stories. Unfortunately in doing so they expose that highfalutin ‘western values’ crap as sentimental drivel.

This photo is titled “Raw Heart” by Abraham. No further damnation is required of US & European refugee policy & their flouting of international law.

(For those interested in viewing the exhibit: Through Jungle Eyes runs from Friday 17 June to Sunday 19 June, at The Stables, North Melbourne)