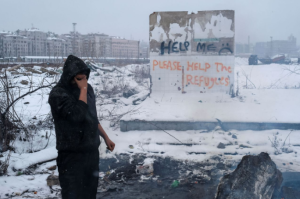 A despondent refugee in Belgrade, Serbia where temperatures are down to -20C / -4F. The Serbian government has asked humanitarian aid groups to stop assistance to force refugees into camps where they fear they will be deported. The help they do receive is from volunteers because there are always & everywhere human beings who cannot look at human suffering with equanimity.

The winter is so brutal that 61 people have died across central Europe, mostly elderly, homeless, & refugees. Two Iraqi men & one Somali woman were found dead from hypothermia in Bulgaria & one Afghan man was frozen to death in northern Greece.

The refugee crises all over the world are one of the most important issues of our times & are all tied to war & economic plunder. It is the historic mission of our generation to decisively address this issue in the spirit of human solidarity & we need to mobilize & collaborate internationally to do so. Thinking out the methods of international defense of refugees is essential because our response will determine the future of the human race. That’s not an overstatement.

Immigration is a human right. Asylum to refugees is an imperative. Open the borders.