These are Kashmiri women watching the funeral of Adil Reshi on Monday in the town of Bijbehara, 45 km (28 mi) south of Srinagar. The photo is a subtle version of the portrayal of Kashmiri (& Palestinian) resistance as lone, nihilistic youth engaged in acts of aggression.

Freedom struggles are misrepresented by showing lone protesters separated from the massive protests they’re part of. In this instance, though certainly less pernicious, it is misrepresentation to show a small group of mourners apart from the thousands who marched from several villages in the Bijbehara area in snow & subzero temperatures to be part of funeral prayers for three young men slain Sunday night by Indian special forces. Although it must be said that showing mourners at a funeral of militants in Kashmir beats the endless photos of women’s prayer rituals, snow covered trees, & images of Dal lake.

The encounter Sunday night between three alleged militants holed up in a house & Indian special forces & army units who encircled them has been repeated many times during occupation, ending in the execution of the militants. A feature of these encounters is that residents in the area defy the military presence to rally in defense of the militants. In this one, residents poured out of their homes, despite freezing cold & threats from the military, to break the cordon endangering the militants. The military responded with aerial firing & tear gas to disperse the residents, injuring several people including a photojournalist.

Whether the three young men killed were militants or not, whether the three AK-47 rifles the Indian army claims were recovered were planted or not, isn’t really relative. The scope of popular support for Kashmiri youth shown during the encounter & at the funeral on Monday speaks to the depth & breadth of Kashmiri opposition to occupation & commitment to self-determination.

Thousands braved freezing cold to pay tribute to the three young men killed: Adil Ahmed Reshi, Abid Ahmed Sheikh, & Masood Ahmed Shah. And so do we. May they Rest In Peace. 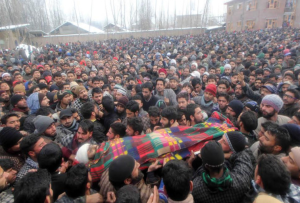 (Photo of funeral of three young men by Shah Jehangeer from Kashmiri media.)