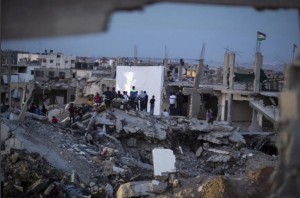 This is a rather poignant photo of the Karama-Gaza Human Rights Film Festival (Red Carpet) being held in the Shuja’ia neighborhood of Gaza City on top of the rubble created by Israeli bombing last summer. The festival on May 12th through 14th is for documentary films on the theme of human rights not just in Palestine & the Middle East but throughout the world.

The Karama (an Arabic word for dignity) Human Rights Film Festival was established in 2009 in Amman, Jordan to use film & culture for advancing social & political change in the Middle East since it’s one of the most dynamic & besieged regions on the planet. Along with the film festival, they sponsor other cultural events for theater, art, music, & educational programs for youth to advance human rights for children, women, refugees, & political, economic, social, & civic rights.