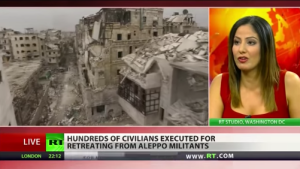 Rania Khalek, well known for writing about the Palestinian struggle, discredited herself as a journalist by agreeing to speak at an Assad-sponsored conference in Damascus. When criticized for doing so, she replied by saying she had been negligent about the character of the conference. Not a judicious quality for an investigative reporter in a war zone.

She apparently did not attend the conference but instead proceeded to west Aleppo during the bombing offensive on east Aleppo to do investigative reporting. There is no evidence of that trip in reports from her or photos & no indication of how she traveled from Damascus to Aleppo. Was she escorted by any Assad officials & did she have Syrian military security like Beeley & Bartlett?

As her career as a reputable journalist was tanking, Russia Today (RT) recognized the value she could play in promoting their narrative about Syria, in particular Aleppo. She has been interviewed twice on RT as an expert, independent journalist, & someone who has been on the scene in Syria.

She exhibits no worthy investigative skills & relies mostly on Russian media, Assadist bloggers, & some quite freaky Muslim-hating sources. She ran with the story about the discovery of mass graves in east Aleppo, not exhibiting the investigative skepticism, tenacity or honesty of a grade school kid doing a book report. The story is that the Syrian army found recent mass graves of children mutilated & dismembered by the “jihadist head-choppers.” So that’s what RT interviewed her about, playing her like a fiddle to help salvage her career.

The story of mass graves is very consequential if it’s true but it only appears in Russian media & Assadist blogs. To explain that, Khalek says “US media is acting as a mouth-piece for Al-Qaeda.” She also claims there is “corroborating photographic evidence” of those graves. In fact, even if there were photos–& there are not–a scrupulous & honest reporter would require more proof than photos in the era of photoshopping & post-truth truthiness. But Khalek forges heedlessly ahead in the best traditions of fake news.

Did it dawn on our intrepid propagandist to suggest that Syria & Russia call on independent forensics investigators to examine those graves & verify their claims? Kashmiri investigators must be quite sophisticated in the forensics of mass graves as are Argentinians & others who have to deal with such horrors. Why doesn’t Khalek publicly call on Syria & Russia to get some real corroborating evidence? She could even suggest Assad allow foreign reporters to enter east Aleppo to do their own investigations.

It’s deeply troubling to see young journalists capitulate so early to the blandishments & rewards of writing hack. It’s a well-trodden path. But once you take it, betraying the principles of journalism rooted in freedom struggles, you have to expect the sharpest criticism. That’s the way it goes. So we prevail on Khalek to stop whining that she is victim of a bullying campaign. Maybe if she gets on Assad’s payroll like Beeley & Bartlett she’ll stop claiming the war in Syria is all about her.

(Photo is screen shot from RT interview with Khalek)