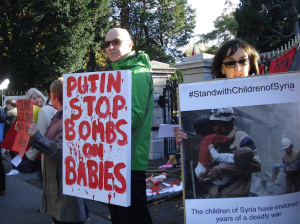 For those who eschew mainstream media as dishonest, RT (Russian mainstream media) actually gave a fairly honest account of the rally. They reported that ISSM “recognizes the legitimacy of the popular Syrian uprising that began in March 2011” & “deplores the brutal & savage repression of the uprising by the Assad family oligarchy.”

RT reported that Nikolay Ivanov, the Minister-Counsellor at the Russian embassy–apparently forgetting he wasn’t in Russia where protests are restricted–called Dublin police on the “illegal” protest. He told RT in an interview that Russian military intervention in Syria was at the invite of Assad & that protesters outside were “unaware about the real situation in Syria” because they were demanding Russian warplanes stop bombing civilians in Aleppo.

RT also got a political hack from the Russian parliament to denounce the Dublin rally as “belated, hypocritical, pointless, & as such, immoral.” Russian working people are apparently not convinced by propaganda in Russian mainstream media because a recent poll shows that nearly 50-percent are afraid the conflict over Russia’s role in Syria could lead to a third world war. That is the political judgement of anyone watching Armageddon unfold in Syria.

Without coverage in Russian media, the small rally might have gone unnoticed. It’s significant that Russia felt threatened enough by a rally of less than a hundred people to denounce it. Bigger antiwar protests in the US are routinely ignored by US media.

The disturbing aspect of the Russian coverage is that discombobulated antiwar activists sucked into the pro-Assad, pro-Russian bombing perspective posted the articles to support Russia. Some even objected that Irish protesters did not denounce the US. To the orientalist mind, only US military power matters so they are blinded to the complexities & realities of war in Syria. They don’t even understand what the hell the US is doing in Syria.

So let us repeat that the only principled antiwar position is to call for the immediate cessation of Syrian & Russian bombing of civilians; to demand the immediate, unconditional withdrawal of all foreign military forces from Syria (& of course that means the US, Russia, Iran, et al), including by air, land, & sea, overt & covert, special forces, mercenaries, & foreign paramilitary operatives.

If your “antiwar” position supports US, Russian, or Syrian bombing of civilians in Syria, you have crossed the line to militarism & should stop kidding yourself that you stand against war if you only protest those conducted by the US or only those conducted by Russia.

War is an international issue. It’s not “understandable,” as some claim that US activists only concern themselves with US interventions. That’s a new theory & a boneheaded one being floated by Assad supporters to avoid condemnation of Russian bombing. People around the world have always protested US wars so what makes misguided US activists think they only need protest US intervention?