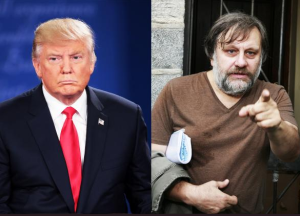 Slavoj Zizek, the rock star theoretician called “the Elvis of philosophers” for a degenerating left just endorsed Trump. That’s because they share more than a runny nose & sniffles problem.

Let me strut a bit here: I’m no clairvoyant & don’t have advanced academic credentials, but the first time I read his rubbish & watched him lecture on YouTube, I considered him an intellectual buffoon, a poseur, a sniveling grandstander who understood little & cared less about the struggles of working people. For the life of me, I couldn’t understand the respect he garnered or the proliferation of study groups & fan clubs for this blowhard.

After his deplorable comments about refugees pouring into Europe from Syria & other war zones being a threat because “there are among refugees also terrorists, rapists, criminals,” one would think he had finally exposed himself not as “the most dangerous philosopher in the West” but as intellectual dry rot, as a lowlife xenophobe & white supremacist. Despite this, he was still allowed to speak at the Left Forum in NYC last May. Would David Duke or Donald Trump who think the same as Zizek be allowed to speak at the Left Forum?

As a woman socialist, I’m accustomed to men not hearing my voice, to tuning the voices of women right out, to being shunned for not deferring or simply disagreeing on issues like the Oslo Accords, on antiwar perspectives & other questions. But a blowhard like Zizek can talk racist, supremacist trash & be published & paid honoraria as a theoretician? Count me out of that left. “Elvis” doesn’t have to leave the building. I’m out of there.