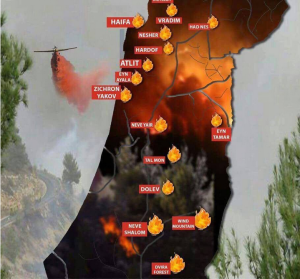 The wave of fires in Israel began last Tuesday. One Israeli media source (Ynet) said there were over 630 fires, both urban & wildfire, from the Dead Sea region to the northernmost coastal town in Israel. Haaretz however reports 90 fires in Israel last week. According to Israeli officials, the fires were not all extinguished until yesterday.

This map of the fires, posted November 24th, clearly does not show the scope of the fires in Israel–whether it was 630 or 90–but does show part of the West Bank in the epicenter of the fires.

Neither Ynet or Haaretz mention that fires began in the West Bank as early as Tuesday but Palestinian media (IMEMC) reported that by Thursday, Palestinian firefighters had responded to over 68 fires. There were headlines in all major media about fires “spreading” to settlements in the West Bank & about evacuating the settlers to safety but nary a word about Palestinian villagers in the path of the fires. Did those fires “spread” from Israel or were they caused by drought conditions effecting the entire region?

Tens of thousands of people were evacuated while firefighting planes from Israel & several other countries were dumping tonnes of water & retardant chemicals on fires in the cities, forests, & shrub lands. Media was reporting them as wildfires due to two months of drought in the region & saying they were spread by high temperatures & dry winds. But in less than 48 hours Israeli officials, including Netanyahu & Shin Bet, were claiming the fires were “pyroterrorism” & “fire intifada.”

Today Israeli media is reporting that 30 Palestinians have already been arrested as suspected arsonists, that 23 of them are still being held, & that Israeli security forces are out hunting for other Palestinians suspected of pyroterrorism. Israeli officials refuse to release the details of the charges but did tell Haaretz that of the 90 fires, at least 40 were arson for political reasons.

Now we just need to get this information straight because those of us who are regular viewers of crime & forensic investigation shows on TV know there are lots of problems & disagreements among fire experts associated with the forensics of fire & arson. How exactly did Israel get forensics teams into those cities & woodlands whilst planes were dumping tonnes of water & retardant chemicals? Forensics teams begin by locating the source of the fire. Does Israel have specially trained K-9 dog units that can locate the fire source–in large cities with hundreds of apartment buildings–& just in a couple days determine the cause was arson rather than wildfires spread by winds? Has anyone ever heard of a forensics team being that fast in their determinations about the cause of one fire, let alone 90 to 630?

But there is a much bigger problem in the pyroterrorism tale. Maybe this map is wrong because there is no media coverage of fires in the West Bank except for that report in IMEMC & reports about fire threatening the settlements. From the map, it appears that the epicenter of the fires included the Haifa & Northern Districts of Israel & at least half of the West Bank. Of the just over 3-million Israeli residents in the Haifa & Northern Districts, close to a third are Palestinian-Israelis. There are nearly two million Palestinians in the West Bank along with about 388,000 Jewish settlers. That means the fires jeopardized the lives & property of about 2.5 million Palestinians & 2.4 million Israeli Jews in the areas worst hit.

If in fact it was Palestinian arsonists who set the fires, they would have to be among the world’s dumbest criminals & have nothing to do with the Palestinian struggle for self-determination against Israeli colonialism.

The whiff of propaganda is coming off the pyroterrorism narrative. If Israeli officials want to make it even marginally credible they will have to publish the entire forensics analyses of all the 90–or is it 630?–fires. In fact, they would have to allow independent fire investigators to examine the evidence.